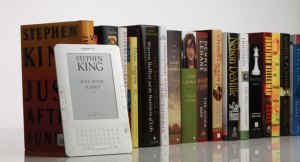 …well, maybe not just yet.

A recent article in the Wall Street Journal (WSJ.com) cites sales figures by Amazon.com claiming that in the past quarter (April-June 2010) they sold more e-books than hardbacks  (by hardbacks they mean hardcovers rather than mass market paperbacks). In the month of June, 2010, Amazon sold 180 Kindle books for every 100 hardcover books, leading us to pose several questions:

Everyone quoted in the article seems to agree that it’s too early in the game and that only time will tell.  While still considered a “niche product”, the growth of e-reader sales has made booksellers take a serious look at this new technology    Heather Reisman,  CEO of Indigo Books and Music Inc. isn’t taking any chances that digital reading might be a flash in the pan.

Another article (also at WSJ.com) by Geoffrey A. Fowler and Marie C. Baca attempts to analyze the reading habits of people who buy e-readers and what impact they will have on traditional print.

The article goes on to explore the habits of e-reader readers and their reasons for making the switch or complimenting their regular reading habits with a bit of new technology.  The best answer seems to be portability.  Why carry around ten books when you can carry around a compact device that can hold thousands?

So, back to the questions.

Are people converting to e-readers in significant numbers?

Is this actual growth in the industry?

Are we witnessing a paradigm shift away from physical books to digital content?

People are always going to want to hold physical copies of their favourite reads.  Much has been made of e-readers and their effect on hardcover sales, but there will always be that dedicated fan of an author or series who will want to display their works as a point of pride.  However, I would not recommend apprenticing to be a Pressman anytime soon.