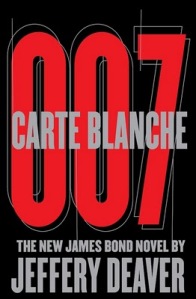 Seems like they’ve been rebooting everything these days.  Batman, Spiderman, even Planet of the Apes, so it should come as no surprise that on the novel front, James Bond was due.  Carte Blanche  by Jeffery Deaver is the official reboot of the 007 series.  Bond is in his early thirties, a veteran of the Afghan war, and living in a post 9/11 world.

This being the computer age, someone at Simon and Schuster (I think) got the great idea to put a trailer on Youtube.  And it’s awesome–for about 41 seconds.  Sharp dressed man, sexy lady, meeting on a rooftop–and then cracking open their copies of the book.  Lame.

We know it’s a book.  Throw in an explosion or razor studded bowler–something!