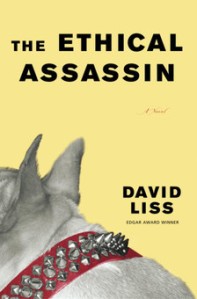 I probably wouldn’t have said it without the beer, but I’d had the beer.

“Okay, fine. Meat is murder.  But you know what else is murder?  Wait, let me think.  Oh, yeah.  I remember now: Murder.  Murder is murder.  That’s right.  Killing a couple of people who are minding their own business.  Breaking into their home and shooting them in the head.  That’s murder too, I think.  The Smiths have an album about that?”

Lemuel Altick is just a kid, selling encyclopedias door to door in the trailer park township of Meadowbrook Grove, a charming accumulation of worn down trailers permeated with the musk of the local pig farm waste lagoon.  He’s good at it, a natural seller, and the profit he makes from this travelling summer job (Champion Encyclopedias!) should just about cover tuition for college in the fall.  So, when he manages to charm his way into one last trailer before knocking off for the day, he’s ecstatic.  Between the disinterested palooka by unlikely name of “Bastard” and his gullible “wife” Karen, it’s an easy score for a talented salesman like Lem.  And so it goes—the pitch is made—the cheque is written, and Lem is on his way to a $1200 commission. Everything’s clockwork, right up until the moment a spikey haired blonde assassin in black jeans and a button down shirt bursts in on them and shoots his almost clients in the head.  Lem’s commission, and possibly his life, are now forfeit.

Luckily for him, this particular assassin has a peculiar code of ethics, not so much the “no women, no children” of Leon Montana (The Professional), but rather one in which he will not kill those he considers innocent.  However, his definition of “innocent” is the peculiar part.  So, Lem is offered a deal.  His silence, coupled with his fingerprints on the murder weapon—just in case—and things will be cool.  Unknown to either Lem or the assassin, things are most definitely not “cool”, as Bastard and Karen are much more than the uneducated hicks they seemed pre-mortem.  Add a corrupt cop, a wannabe pedophile, a low-level mobster, a meth operation, and most importantly, $40 000 in missing cash to the mix and you have the bizarre ride that is The Ethical Assassin.

I first saw a copy of The Ethical Assassin in a store window while walking down Queen St. West in Toronto, way back in 2006.  What caught my attention were the title and the question that popped to mind.  Is it possible to be ethical when one’s chosen profession is the killing of others?  After all, murder is not exactly what the masses would call an “ethical” profession.  Sure, there are reasons to kill: self-defense, the “politics by other means” known as war, maybe even (if you’re pro-death sentence) execution as punishment for one’s crimes. Melford Kean, the titular “Ethical Assassin” kills not for money, or revenge, but due to a deep rooted—and decidedly odd—sense of morality.

Kean is not so much an ethical assassin as he is an ideological one.  Charming on the surface, yet more empathetic to the animal kingdom than his fellow Homo sapiens, Melford has an uncanny ability to argue his position, making an intriguing portrait of a zealot.   Mired in the idea of moral relativism, what seems/is amoral to Lem, Melford accepts as the price to be paid for his activism by other means.  Without giving out too much detail as to why Melford does what he does, let’s just say it’s not about the money or the drugs but more about his profound sense of egalitarianism of species.

It becomes obvious during the course of the novel that Lem, while terrified of Melford’s predilection towards extreme violence, is also somewhat taken in by his charming nature, and while not exactly becoming friends, they share a relationship that borders on it.  And that’s the thing about Melford—he’s a zealot, and a persuasive one.  Lem is smart enough not to be taken in by his ideology, but their time together and some of his subsequent choices show that he’s definitely influenced by Melford’s arguments, even if only on a subconscious level.

As for Lem, he’s a charming portrait of a boy in the wrong place at the wrong time.  An earnest and upstanding kid, simply trying to make the best of the bad deal he’s been dealt in life, he spends the novel trying to extricate himself from a situation not of his making while not getting killed in the  process.  There’s some irony in the fact that he doesn’t really have to worry about Melford—ethically Lem is in the clear—but his perceived association to the crime by those seeking revenge, and the $40K in drug money.  His problems are also compounded by Melford’s desire to look out for him, all the while proselytizing about his system of ethics while trying to sort out the situation in a way that keeps Lem from harm.

While Lem and Melford are the focus of David Liss’ novel, the villains of the story are interesting in their own right.  The relationship between B.B. and Desiré, meth kingpin/pedophile wannabe and his sexy former addict/consigliere, a truly vile corrupt cop by the name of Joe Doe and a former mafia heavy by the unlikely name of Kenny Rogers (hence the nickname “the gambler) demonstrates an odd alliance of interesting characters.  B.B. seems an unlikely kingpin, more concerned with “advancing” the moral character of young men, while Desiré finds herself questioning her allegiance to a man who may have saved her from the gutter but is on a downward spiral into behavior she can’t countenance.  Doe is a delusional character who thinks he’s the smartest man in the room while continually proving he’s not, and the Gambler is actually somewhat sympathetic.  He’s got Lou Gehrig’s disease, and while his chosen profession is suspect, it’s the only way a former mob heavy can pay his mounting medical costs.  Brought together in opposition to the partnership that is Lem and Melford, they all discover that the ethical assassin is not someone to be trifled with.

There are times when The Ethical Assassin feels like social activism parading as fiction, yet it’s so well written that the author can be forgiven for injecting his particular world view.  David Liss has been interviewed on several occasions regarding the animal rights message of the novel and is very adamant that he’s not suggesting direct action, claiming that the character of Melford is written so outrageously as to make this obvious.  However, there are times in the novel where his claim falls short and it devolves into a lecture on the evils of both the commercial farming of animals and the demerits of choosing to be a carnivore.  I’ll take his word on that (re: direct action) but reserve the right to question his sincerity as to whether or not he’s lecturing the reader.  It’s a narrow path to follow, creating such a charming and persuasive character while still showing the flaws of their argument.  It’s also hard to review without delving into the controversial subject.

Having said that, The Ethical Assassin is a charming novel, well written and entertaining, and deserving its place in the pantheon of unusual crime fiction.