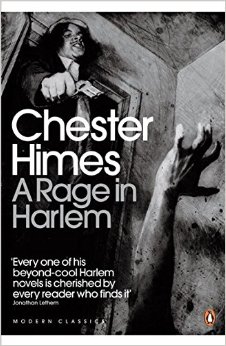 “I just wanted to kneel here beside you, Reverend Gaines, and give myself up to the Lord.”

Date of Publication: 1957 as The Five Cornered Square

Jackson is a simple man, a “square” as it were, a black man just trying to get ahead in 50’s Harlem, trying to do right by his lady Imabelle and shower her with the finer things in life.  So when Imabelle introduces him to Hank and Jodie, a couple of cool cats who have devised a way to turn Jackson’s life saving of fifteen hundred bucks into “Fifteen Grand!”, even a God fearing man like Jackson succumbs to temptation.  Alas, for Jackson, stupidity rather than pride comes before a fall, and when the fall comes, it’s to the tune of fifteen hundred bucks.  Jackson, facing financial ruin, compounds the interest by stealing from his employer and investing his ill gotten gains in a game of craps, a game at which he is…well…crap.

Now on the run from an ersatz U. S. Marshall and desperate to repay his former employer, Jackson enlists the help of the only person who might thread this needle of misfortune, namely, the good sister Gabriel, a hustler who works the streets by day in the guise of a Sister of Mercy, and spends the nights as a dope fiend. She’s otherwise known as Jackson’s ne’er do well brother Goldy.  What Jackson lacks in street smarts, Goldy makes up for in spades, and while Jackson just wants back his sweet Imabelle, Goldy is more interested in the trunk of gold she’s been known to travel with. However, to retrieve Imabelle (and the gold), Goldy and Jackson have to outsmart Hank and Jody’s crew, all the while keeping the law off their trail. Before they’re done the streets of Harlem will run red with blood, but it’s an even bet as to whose.

The confidence game is a hallmark of great crime fiction, especially when it ends badly. Don’t believe me? Just think of Roy Dillon and his mother Lilly at the end of Jim Thompson’s The Grifters. Combine a con game with a pinch of noir and a dash of the hardboiled, top it with a generous dollop of the absurd, and you’ll find yourself reading A Rage in Harlem, the perfect introduction to the dark noir of Chester Himes. Described in the introduction of my copy as a “comedy caper”, a more apt description would be, “absurd noir”, for there are times when Hime’s black humour sorely tests the reader’s suspension of disbelief. A dedicated reader, managing to push through the more ridiculous aspects of the novel will find their patience well spent, for what it lacks in realism, this tale of greed, deception, and murder makes up for in sheer murderous fun.

A Rage in Harlem also provides the reader their introduction those iconic Harlem detectives, “Coffin” Ed Johnson and “Grave Digger” Jones, a pair of black detectives who can go where their white counterparts dare not. Carrying “specially made long-barreled nickel-plated .38 calibre revolvers”, and being very free in their use, these two detectives have convinced the people of Harlem that they would shoot a man dead for not standing straight in line.

Grave Digger and Coffin Ed weren’t crooked detectives, but they were tough. They had to be tough to work in Harlem. Colored folks didn’t respect colored cops. But they did respect big shiny pistols and sudden death. It was said that in Harlem that Coffin Ed’s pistol would kill a rock and that Grave Digger’s would bury it.

Skirting the edges of the law they’re sworn to keep, these two detectives believe in their own brand of street justice while their superiors believe in looking the other way as long as they bring results.  Those results generally bring a lot of business to the local undertaker. That’s not to say they’re corrupt, but the delineation between right and wrong for Grave Digger and Coffin Ed depends on their own moral compass rather than any set of formal rules. Having found an audience for their peculiar brand of justice, Himes’ A Rage in Harlem became the first of what became known as the Harlem Detective series.

As for our cast of characters, Jackson is the epitome of the hapless protagonist, unwilling to recognize Imabelle’s true nature and innocent to a fault.  His brother Goldy is another creature altogether, street smart and cunning, saddled with an addiction to both drugs and the greed of easy money, and yet altogether more sympathetic than his simple brother, mostly because he’s aware of who and what he is, and of course, what motivates Imabelle.  Jackson may not know it, but he’s run afoul of the femme fatale, although Imabelle would be hard pressed to admit it, perhaps even to herself. What can be said for certain is that she’s plenty capable of handling herself and the men around her, even those that recognize her for what she is, at least until she meets Grave Digger Jones.

Hank and Jody are the least interesting of this cast of characters, a couple of soulless killers with little depth of character, merely a means to an end, so despicable as to make the reader root for the dimwitted Jackson and his shady sidekick Goldy, and to humanize Grave Digger and Coffin Ed when they step outside the lines of what we generally consider acceptable behaviour in those charged with protecting society from its baser instincts.  They’re men in need of murdering, and Grave Digger and Coffin Ed are up to the task.

Within the pages of A Rage in Harlem, Himes has combined all the elements of a classic crime novel, creating a Harlem I’m not entirely sure ever existed, and populating it with classic tropes of the genre.  We’ve got the Mcguffin, evidenced in Imabelle’s trunk of gold, the misplaced love of a good man, and the object of that love, the femme fatale, personified in Imabelle herself. Add to that a couple of hard-boiled detectives working just this side of the law, and you end up with a magnificent addition to the genre.