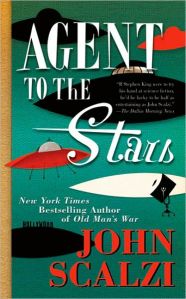 Agent to the Stars by John Scalzi is the first novel I someday hope to write.  Started as what he calls, “a practice novel” (that novel everyone tries just to see if they can do it) back in 1997 and posted to his website as “shareware” (from the preface),  there it sat, gathering fans until 2005, when he was contacted by a publisher (every writers dream) and an initial run was printed by Subterranean Press.  This time around, Agent to the Stars has been picked up in paperback format by TOR.

Now Scalzi is not new to writing, beginning his career as a film critic and humour columnist, later becoming a freelance writer and author.  Since 2005, when Agent to the Stars became his second published novel ( Old Man’s War beat Agent out of the gate by mere months but it can be accurately claimed to be his second novel), Scalzi has focused on follow-ups to OMW and his personal blog entitled “Whatever“.  So, he’s had some practice.  However, that doesn’t detract from the impressive quality of a novel he wrote on a lark.

As to the story:

Suppose you’re a member of an alien society wanting to make first contact with the silly little creatures that inhabit the third planet around a very average G-type (aka yellow dwarf) star.  Then suppose you’ve tapped into all the random information (specifically television and movies) they’ve been broadcasting into space for the past century or so.  For every E.T.  you watch, there’s a Thing, or more specific to the Yherajk (as you call yourselves), a little movie called, The Blob.  Well, you might have second thoughts about the whole thing, based on the apparent xenophobia exhibited by the local populace.  However, if you’ve spent the time and energy to come half way across the galaxy, you’re not going to let a little paranoia get in the way of first contact.  The question is how to make a good first impression?  The answer…hire a great publicist!

That, in essence, is the premise of Agent to the Stars.

When Tom Stein, an up and coming talent agent is told he has a meeting with the head of the agency, he expects that Carl Lupo (legendary agent and owner of the agency) is going to congratulate him on his latest deal.  Tom certainly doesn’t expect to take a meeting with some gelatinous goo named Joshua, sitting on the table in an aquarium.  Once he gets over the initial shock of first contact with an alien that resembles a bad b-film monster (and incidentally, smells like ass), Carl sets forth a proposition.  Find a way to market the Yherajk to humanity, a way to gently introduce the populace to a genuinely agreeable alien society wrapped in very unpleasant form.  No big deal for one of the hottest talent agents in Hollywood, right?

And with that, Tom takes home Joshua (in a water jug) to brainstorm ideas on how not to spook the entire human race when the time comes to introduce the  new neighbours.  The answer they come up with is a doozy.

If there were any comparison to make to other first contact stories, I would equate Agent to the Stars to E.T.: The Extraterrestrial, only with a really, really uncute alien.  The refreshing thing about this novel is the lack of any sinister motive.  There’s no desire on the part of the Yherajk to ingratiate themselves into earth’s society only to round earthlings up to process into tasty treats.  They don’t want our water, or to subjugate the planet.  I spent most of the novel expecting that overused plot device to crop up, so it was a pleasant surprise to see that the Yherajk have no ulterior motive.  Of course, there is also the comedic element of this entirely benign alien society that resembles something from our worst nightmares.

The cast of secondary characters are well thought out, from Tom’s feisty assistant Miranda, to Jim Van Doren, the mildly slimy, yet talented journalist who has no idea where his snooping will eventually take him (Let’s just say, it’s not Kansas).  There’s also Michelle Beck, Tom’s biggest client, a beautiful actress long on legs but short on intelligence.  Unfortunately, she wants to stretch those legs, insisting that he get her a casting of substance, regardless of talent.  As if Tom doesn’t have enough on his plate, what with that whole, “introducing an alien species to mankind,” thing…he’s got to keep a spoiled (yet loveable) actress happy.  Which will prove harder?

By the end of the novel, Scalzi’s got the whole situation wrapped up in a satisfying bow (no spoilers here, thank you!).  Agent to the Stars is so much fun that the reader (well, this reader) couldn’t put it down, and deserves a place of note in a genre where (usually) the only good alien is a dead alien.  Very refreshing and well worth the time.