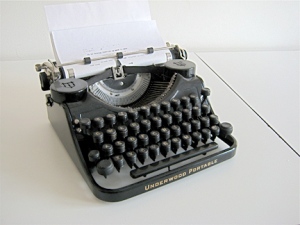 The end of an era?

When I was a kid, I used to read a lot of Stephen King novels, and one always stood out in my mind.  Misery, the story of Paul Sheldon, held against his will by the crazed Annie Wilkes and forced to resurrect the main character of a series of novels that have, shall we say, “held her attention” for a long time.  During the course of his detention, he taps out Misery’s Return, and (spoiler alert) when he gets the chance, clocks her with the aforementioned typewriter.  Try doing that with a laptop and doing any significant damage.
The point I took away from the story wasn’t so much that typewriters can be used as lethal weapons, but rather that I’d like to be a writer, pecking out the great Canadian novel (alas, the great American novel is beyond me, both by way of birthplace and temperament) on one of those nifty manuals, whipping out sheet after sheet of brilliant prose and leaving them in a pile to be edited later with a nice red pen.  It didn’t seem too unrealistic a dream either. I’m not too young to remember manual typewriters, having been exposed to them in grade school.  No power assisted key-strokes, just good old-fashioned manual labour.  If you’ve ever tried to make your mark with one of these leviathans, you’ll know what I mean.
Eventually, time and progress overtook the manual typewriter.  First it was the electric typewriter, later simple word processors, and finally in recent years, the laptop.  I can even remember when the name “typing class” went out of fashion.  Suddenly, we were taking “keyboarding” lessons, and not only the manuals, but the electrics, were quickly phased out of the local high school.
There is irony in nostalgia, however.
After all, today’s word processing programs make writing and editing so much easier than back in the day.  No more reams of wasted paper, no more fiddling with either ink or eraser ribbon, not even that one letter that always seemed to rise slightly above the type. The reality is this: today it is a much easier world in which to be a word smith.  Just a tap of a button and your revision is done.  So, it shouldn’t come as a shock to read that the last maker of manual typewriters has finally stopped production.

“Godrej & Boyce Manufacturing Co. Ltd. has shuttered its facility in Mumbai, India, where as recently as 2009 the company was making 12,000 mechanical typewriters a year.”

So, is that all she wrote for the typewriter?
Well, not exactly.  The key word here is, “manual.”  The good people at the Chicago Tribune have looked further into the matter and for what it’s worth–the typewriter may be in its death throes, but it’s still got a bit of life left.
So maybe my dream of sitting in front of an old Underwood with a pile of fresh paper on one side and that great novel on the other, celebratory bottle of whiskey off to the side for the moment I declare my work done, isn’t quite a pipe-dream yet.  Perhaps it’s time to browse eBay.