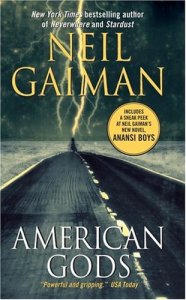 Belief is a powerful concept.  A loaded concept.  One man’s belief can be anothers heresy, and belief has been the driving factor behind most historical events, both eminently Good and supremely Evil.  Belief fueled the race to land a man on the Moon, the Civil Rights Movement, and the virtual eradication of many diseases.  It has also resulted in the Jim Jones Massacre, Slavery, and the  insane ideologies of both Fascism and Communism…two world views that have demonstrably  cost more lives in the past century than any Religion.  Yet we all yearn to believe in something, whether it be secular or metaphysical…even the Atheist has faith in something…or rather…nothing.  We need belief, in ideas, in movements, in various Deities.  Without belief, life would be empty and meaningless.

Neil Gaiman decided to look at the the opposite side of the coin, asking, “what if these various Gods and ideas we pray to need our belief just as much as we do?”  What if their very existence depends on our belief and that without it, they wither and die?  Furthermore, what if, in these days of science and technology, the old Gods were being superseded by the new: Gods of Television, Fashion, and all those things we worship in our everyday life without even realizing it?   Finally, what if they decided the World was not big enough for the both of them?  American Gods is that story.

Gaiman’s novel tells the story of a war between those ascendant (the new Gods of Science and Entertainment) squared off against the diminished (think of the Norse, the Greek, the Egyptian…any Gods no longer actively believed in but relegated to mythic status) in a land that does not hold room (or belief) for both.  It is told through the eyes of one human participant, aptly named Shadow, an ex-con down on his luck.  Recently released from prison only to find his wife is dead, Shadow expects to live a listless existence, no longer caring about the world at large.  He’s not really alive, it’s just that he hasn’t died yet, and when a mysterious grifter going by the name of “Wednesday” makes him a simple offer, he reluctantly agrees…after all, he’s got nothing better to do.

During the course of his travels with Wednesday, Shadow interacts with almost the entire Pantheon of human belief, from the old Gods Odin, Osiris, and the less well known Anansi,  to the new Gods of Television and Technology.  (Technology himself ironically appears in the form of a pimply teenager, supremely confident in his abilities until he comes across a dead zone for cell signals…a bit of a nod to nerds everywhere)  He comes to find these Gods as vain and petty as man, obsessed with being remembered and desired, and in the midst of the war, finds himself a small part in a con game being played on man and Deity alike.  Yet his small role turns out to be pivotal to the conflict and to thwarting the machinations of those who want neither side to win but are rather more concerned that the conflict take place.  As does his parentage.

American Gods is a masterfully written tale and food for the fantasy junky.