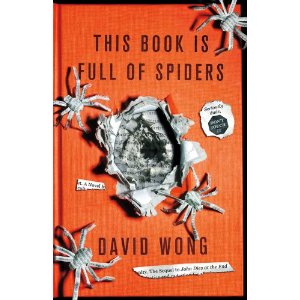 Thanks to IO9 for the nifty preview! 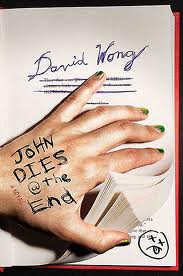 “And watch out for Molly.  See if she does anything unusual.  There’s something I don’t trust about the way she exploded and then came back from the dead like that.” ~David Wong.

Man, no kidding.  Having your dog explode can sure mess with a dude’s head.  Yet that is far from the weirdest thing that happens in David Wong’s sadistically, hilariously, horrifying(ly) great novel, John Dies at the End.

I finished this novel a couple of weeks back, but still feel like I have a hangover.  The good kind, like when you wake up after a night of drinking, roll over, and there’s a beautiful brunette lying beside you.  The kind of hangover that’s worth it.  Having said that, trying to describe this book, hell, even just a brief synopsis, seems an impossible task.  Bear with me–maybe I should start at the beginning.

So, there’s these two dudes, David Wong and the aforementioned John, living the lives of your average twenties.  McJob down at the video store, partying in their spare time, trying to meet hot chicks that are willing to, if not have sex with them, at least talk to them.  Well, Dave is–John doesn’t seem to have much of a problem in that department.  He’s in a band, and as we all know, when you’re barely out of your teens, shit like that seems cool.  Especially to the ladies.

John also likes to party, never having seen a drug he’s been unwilling to try.  After what might be called the “worst trip in history” courtesy of a Rastafarian drifter (whose magic tricks are suspiciously convincing) they meet at a local bush party, life for these two slackers will never be the same again. *Note to reader–never put your buddy’s used syringe in your pocket.

You see, the drug,”soy sauce,” doesn’t just mess you up–it breaks down the wall between Universes and makes a laughingstock of the rules of time.  Oh, and it’s alive.

Next thing you know, both Dave and John are down at the police station answering questions from some very perturbed cops trying to explain why they have five dead (gruesomely dead) and four missing, courtesy of  a party they know John was at.  Dave is tripping pretty good, reading the cop’s mind (Morgan Freeman, he calls him) and worrying about Jennifer Lopez (real name, not the actress), the girl he has a crush on and also one of the missing.  At that point, “Morgan” steps out of the room (apparently John has died and it’s not even the end) and Dave realizes the other cop is not what he seems.  Being attacked by a mustache (yep, you read that right) will do that to you.

From there it’s a blistering ride as Dave manages to escape the jailhouse, return to the scene of the crime, find a dog (who at one point appears to be possessed by John), get shot, get abducted to Vegas with the other missing by an acolyte of “Korrok” (more on him later), witness the creation of a wormhole to another Universe and manage to close the wormhole with the help of a preacher turned magician (Dr. Albert Marconi) and a stirring rendition of a song by John’s band Three Armed Sally: “Camel Holocaust.”  That’s just the first act.

Korrok is the villain of the tale, either an elder god along the lines of Cthulu…or a sentient biological computer run amok in an alternate Universe.  Either way, it wants into our Universe and if Dave, John, and a few other players cannot thwart its plans…well, we’re all fucked.  Korrok has agents everywhere, known as the shadow people, has replaced many of the residents of “Undisclosed” with what can only be called replicants, and an acolyte with the charming nickname of “Shitload” trying to advance its agenda of Universal domination.  All of them.

Of course, there is a girl, Amy, the one-handed sister of big Jim Sullivan (deceased) and probably the only reason Dave will do his best to save the world–not that he knew this when he first met her.

I’m not doing justice to the story with this abbreviated synopsis, but it’s just too convoluted to sum up succinctly and there’s no need to spoil the fun for you.  I will say that John Dies at the End meanders at times, and reads like just a bunch of stuff that happened to these two dudes, although technically it’s Dave telling his story to a skeptical journalist.  Having been written haphazardly as a series of blog posts since 2001 and ballooning into a 466 page book by the time of its publishing, it seems an understandable complaint–and yet bears no relevance to whether the reader will enjoy the novel.

From start to end it’s a huge mindf*ck (sorry, I can’t think of a better term), and every time you think you’ve got your head wrapped around the storyline, something happens to make you question where the hell this is going and what actually happened before.  I was within a hundred pages of the end of the novel and began to get worried that there was no satisfactory way to tie up the loose ends in the amount remaining.  Really worried.

And then he did it.

One spoiler…if John dies at the end, then it’s not at the end of this book. David Wong claims to be hard at work on the sequel but for now we’ll have to be satisfied by the upcoming movie.