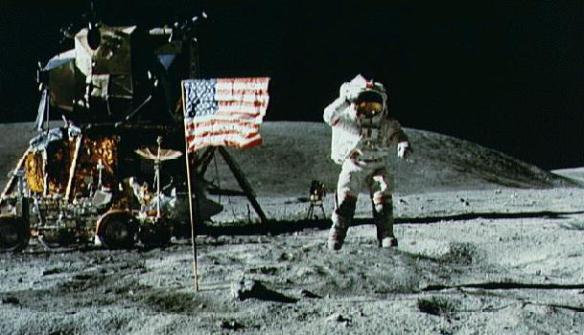 Between July 16, 1969 and December 7, 1972, NASA (the National Aeronautics and Space Administration) managed to land six missions on the Moon.  Apollo 13 was, of course, famously aborted when an on-board explosion crippled the vehicle and the astronauts relied on the lunar module as a lifeboat for their return.  With the successful completion of the Apollo 17 mission, manned exploration of the Moon came to an end, but 41 years later authors are still chronicling the missions, speculating about the future of man’s conquest of the moon and writing alternate history based on speculation about lunar missions.

I was born just shortly before the last Apollo mission, so missed the excitement involved with lunar exploration.  As a child I witnessed the Space Shuttle program from inception to eventual retirement and have always held the exploration of space in great regard.  Lately, lunar missions (either real or speculative) have been on my mind, so today’s post is dedicated to three books regarding the Moon, one historical and two speculative. 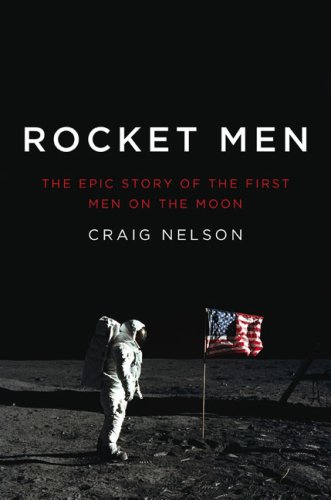 First on the list is Rocket Men by Craig Nelson, a biography of the United States space program, culminating in a description of Apollo 11, the first manned mission to the moon.  From the closing days of the Second World War, Nelson traces the history of manned space flight to NASA’s defining achievement of a man on the Moon.  It’s a fascinating look at the race between the United States and the Soviet Union, one in which the Soviet Union took an early lead and the United States focused their efforts to catch and surpass their cold war foes, eventually culminating in the Apollo program.  I’m only about half way through but find myself captivated by his account of the formation of NASA and their counterparts in the Soviet Union.  I feel confident in recommending Nelson’s biography of the program (after all, I already know how it ends) for anyone who has an interest  in the subject.  Looking around on the internet, Nelson has been criticized for a few technical errors in his account, but, like most of the populace, I’m not a rocket scientist and a few quibbles do not detract from a wonderful account of the early days of space-flight.

Back to the Moon-Travis S. Taylor and Les Johnson 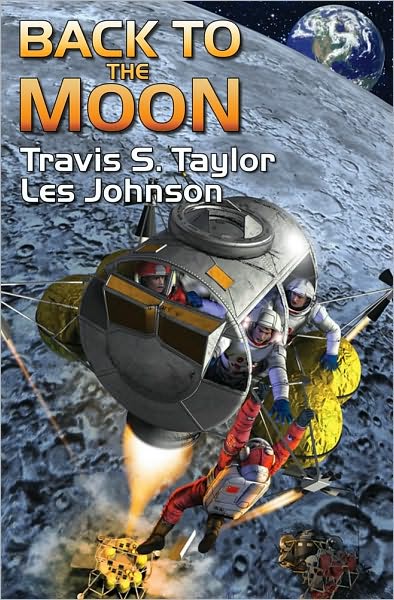 Back to the Moon is a nice piece of speculative fiction by Les Johnson and Travis Taylor, who also wrote a neat novel (with John Ringo) about the invasion of Earth by a multitude of Von Neumann machines in the 2008 novel, Von Neumann’s War. Back to the Moon tells the a story of the near future in which the United States has finally refocused the mission of NASA on returning to the Moon.  Using a modified vision of the Constellation Program, the United States has once again embarked on a manned moon mission, but they have competition from the private sector in the form of a Virgin Galactic inspired space-plane/lunar orbiter by the name of Dreamscape.  Gary Childers, president of Space Excursions, is an entrepreneur in the mould of Richard Branson and also interested in bringing the experience of space flight and lunar excursions to the common man (well, those who can afford the fee).  Space Excursions is also interested in beating NASA to the Moon, although they aren’t prepared for a landing.  Meanwhile, China has become the successor of the defunct Soviet Union and is also striving to beat the Americans back to the Moon.

When Childer’s Dreamscape vehicle manages to orbit the Moon in advance of NASA’s efforts, the pilot and civilian crew are astonished to receive a distress signal from a crew of Chinese Taikonauts.  They’ve beaten the Americans to the Moon using stolen technology (ironically, from both NASA and Space Excursions) but flubbed the landing.  Once discovered, it becomes a race against time for NASA to launch a recovery mission before the Chinese succumb to their circumstances.

Now I suppose naysayers could nitpick this novel by calling it a “rah-rah” America first bit of fluff, but I found it a fun, pulpy read.  Taylor knows his stuff, after all, he is an actual rocket scientist, and while I would never describe his work as “literary” in the classical sense, he tells a compelling story in an accessible manner.

Adrift on the Sea of Rains-Ian Sales 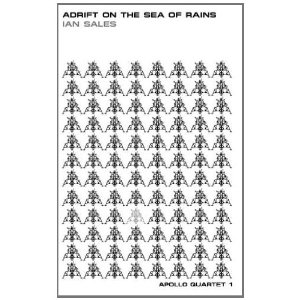 Adrift on the Sea of Rains, is the first in a quartet of proposed novels by U.K. novelist Ian Sales and can be characterized as both speculative fiction and alternate history.  It concerns a group of astronauts who become stranded on a lunar base after a nuclear exchange by the Soviet Union and United States.  Their only hope for rescue is a salvaged Nazi Wunderwaffe, a “torsion-field” generator that can allow them passage through alternate universes, in hope of finding one where the Earth has not been destroyed.  Complicating their situation is the problem of how to get home in the event they find an Earth to return to.

Now in all honesty, I haven’t read this book yet.  It’s on my intent to read list, but having perused the first chapter, I have little doubt that it’s going to be a compelling, although possibly dismal, novel.  Ian Sales appears to have taken a more literary road with regard to his writing style and it shows. His characters are maudlin (granted, you would be too if you’d witnessed the destruction of the Earth and faced a slow death on a desolate rock) and somewhat nihilistic. He’s also managed to win the 2012 BSFA (British Science Fiction Award) for short fiction.

I realize I’m not doing justice to his novella in this brief description, but want to inform you of a talent that has recently come upon my alternate history radar.  I hope to give you a more detailed report once able to spend some time with what appears to be an emerging talent.