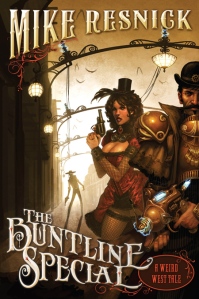 The Good, the Bad, and the Undead

“A lot of people think Ringo’s the best,” said Holliday.  “And if you’re going to be the best, you have to beat the best.”

“Think of the damage you two could do to the Cowboys if you were on the same side.”

“We would never be on the same side.  Sooner or later we’d have to meet out in the street.”

“Even though he’s a zombie?”

Mike Resnick’s The Buntline Special introduces us to a world in which the U.S. government (circa 1881) has contracted Thomas Edison to utilize his talent for invention in what would today be called a “Cold War” with the Indian nations over the future of the United States.  In pursuit of this goal, Thomas and his good friend Ned Buntline (who, in this universe is an engineer rather than a dime novelist) are tasked to discover a remedy to the magic of medicine men such as Geronimo that has thus far stymied government efforts to realize their manifest destiny of creating a nation that stretches from sea to sea.

However, the native medicine men are fully aware of their efforts, employing a number of assassins to take Edison (Buntline may be a wonderful engineer, but lacks Edison’s talent for invention) out of the picture.  To protect their interest, the government has employed the Earp Brothers (Wyatt, Virgil and Morgan), and they in turn have called upon the special talents of both Bat Masterson and a consumptive, yet lethally effective, Doc Holliday.

Based in the town of Tombstone, itself on the edge of “Indian Territory”, Buntline and Edison have brought electric light to the city and the horseless stagecoach to the region.  Armored against Indian attacks by Buntline’s signature invention (bullet proof brass of all things), the Buntline Express has severely dented the local horse trade (both honest and illegal) and gained him the wrath of the Clanton-McLaury gang.  Since Edison and Buntline have a synergistic relationship, the Earps find themselves tasked with protecting these two amazing minds from the magical forces of Geronimo and the more pedestrian efforts of the Clanton gang.

During the course of their investigation as to which medicine man is targeting Edison (the original consensus is Geronimo), Bat Masterson runs afoul of the native warrior and finds himself on the receiving end of a particularly nasty curse.  By day, he is a man; by night—a man sized bat.  Meanwhile, Holliday finds himself stalked by Johnny Ringo, the gunslinger hired to kill Edison—and possibly Doc’s equal with a pistol.  Ringo’s also been dead for awhile, so good luck killing him.

Told from the viewpoint of Doc Holliday, The Buntline Special finds its strength in the dialogue, specifically in Doc’s quick wit and devil may care attitude.  It’s quite easy to become immersed in the Steampunk Universe Resnick has created, mainly due to the affinity one feels for Doc.  Here’s a man who lives every day as if it were his last, in a world where magic and science duel for supremacy, yet unable to avail himself of either.  He’s just as dead as Johnny Ringo, it being a matter of time before consumption gets the better of him, and that leads to a fatalistic honesty in his everyday dealings.  Of course, he’s not quite DEAD dead, and still has to deal with the aforementioned revenant.  How does one kill a man who’s already dead?  The answer lies with the Buntline Special.

Now this isn’t the foot long version of the Colt Peacemaker made famous by the real Ned Buntline.  Remember, this is a Steampunk novel.  Therein lies the magic—or fantastical science—which makes this first of the Weird West Tales such a delight to read.  If anything detracts from the story, it’s the fact that while Resnick does take liberties, The Buntline Special still plays along the same lines as the real history of Wyatt Earp.  Morgan still gets killed. There’s still the shootout at the O.K. Corral.  Pretty much everything that took place in real life is covered, leading the reader who knows their history to be able to predict what’s going to happen.  However, while those things are necessary to maintain some semblance of continuity, it’s the masterful blending of history and fantasy that keeps you reading to the end.  For the hardcore Steampunk fan, this novel is a straight shooter.