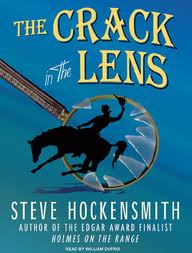 Gustav tried to spin away with the shears, but I managed to hold him in place.

The brothers Amlingmeyer are back in town!  That town being San Marcos, where Gustav once lived as a cow puncher, having loved and lost a girl named Adeleine.  She was a “soiled dove”, a working girl whose murder made less than any impact on the rough and tumble town, but plenty on the elder Amlingmeyer, who, having studied the “deducifying” ways of one Sherlock Holmes in the interim, has finally returned to town (his younger, and self-described, “handsomer” brother Otto in tow) to give her the justice she deserves.

San Marcos is not the town he remembers.  Proselytising bands of zealots roam the streets and law and order is the rule of the day.  Even the old whorehouse has been made over into a wallpaper shop.  Yet a good time is still to be had, those delving in the fleshly trade having been moved just outside city limits, beyond the reach of either God or his lawmen.

Yet lawmen are useless to the brothers Amlingmeyer.  Milford Bales, the local Marshal (and former friend of Gustav) wants them gone.  He has his own ideas as to what (or whom) befell Adeleine, and those suspicions fall (suspiciously) close to home.  Sheriff Rucker’s in the pocket of the pimps, Ragsdale and Bock, neither of whom wish the case to be re-opened.  Bad for business, you know.  Even Gustav is proving less than useful.  His normally well honed method has fallen by the wayside, and he himself is prone to conclusion jumping.  He’s off his game, and its going to take a clear head to sort things out.  Otto seems to have the only clear head around, so it’s up to him to step up and fill the position–before “Texas Jack” strikes again.

Once again, Steve Hockensmith delivers a tale full of quirky characters, from Brother Landrigan, leader of the local parish, an autonomous sect known as the Shepherd of the Hills Assembly of the Living God (whew!  That’s a mouthful), to big Bess, a whore whose name is a bit of an understatement.  Then there’s the Krieger’s, local librarians/death portrait photographers, and of course, Ragsdale and Bock, “honest” businessmen by day, the western equivalent of mobsters by night.

Gustav and Otto are also a  pair of characters, one the illiterate follower of the Holmesian method (and partial to big whiskers, ten gallon hats and angry mumbling), the other an aspiring author and gentleman with a quick wit and flair for things genteel.  A study in contrasts, Cowboy Holmes and a jovial Watson.

The Crack in the Lens is the fourth novel in the Holmes on the Range series, and the least “Holmesian” of the bunch.  But that’s the point of the novel.  Gustav has lost “the method,” blinded by rage and grief and the desire for revenge, and it’s only when circumstances force him to follow the method that he’s able to recapture his rhythm and solve the crime(s).   I love a good mystery, especially a mystery where the culprit is not immediately identifiable, and in this, Hockensmith once again prevails.  An added twist, the addition of a Whitechapel connection, lends  a bit of intrigue to the novel.  Is Texas Jack a copycat, or the infamous Jack the Ripper, come to America to continue his spree in the relative anonymity of the open spaces of the West?

Another thing–generally, the rule of thumb when writing is to “show”, not “tell.”  But how does that work, when the narrator is telling a novel sized story?  In this case, pretty damn well.  Otto is not one for a lot of descriptive flair, but “tells” the story as if you were sitting around the campfire.  A lot of dialogue, not so much description.  That’s where the magic lies in a Hockensmith novel–witty banter rather than long-winded descriptions.

Steve Hockensmith is the author of the Holmes on the Range mysteries and both the prequel and sequel to Pride and Prejudice and Zombies.  He maintains a blog at www.stevehockensmith.com.

Wow, seems like only last week that I was re-directing interested readers to Steve Hockensmith’s blog to find their copy of the first Holmes on the Range short story featuring the Amlingmeyer brothers…wait…it was, wasn’t it?

At the time I was ecstatic to be able to read an original (to me, anyway) short story about Gustav (Old Red) and Otto (Big Red) Amlingmeyer and their adventures sleuthing in the old West.  Originally published in Ellery Queen’s Mystery Magazine (if my contacts at Wikipedia are accurate), these stories have not been available to those without a subscription stretching back to 2003.  Having jumped on the Holmes on the Range chuckwagon only recently, I’d lamented ever getting a chance to complete the series.

According to Steve’s post on the subject, the new anthology should be available as either an e-book or dead tree version sometime in March 2011.